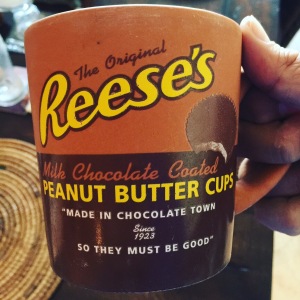 Inspired by this huge cup, picked up at the Hershey store in Las Vegas, I am now officially hunting down Reese’s Peanut Butter Cup coffee.

Yeah, it will probably be gross, but I’m willing to risk it.

I picked up this little fellow in a tiny shop in Williams, Arizona while waiting to go in for dinner at the Red Raven. It’s cheesy, but it reminds me that I’ll live there again one day, when the fires, mudslides, quakes, crowds, taxes, and cost of living all get to be too much.

I picked up this snarky little joy-cup at the Johnson Manned Spaceflight Center in Houston back in 2014, and it remains a favorite.

A thoughtful and fantastic gift from an old friend serving at the U.S. Embassy in Beijing.

My wife bought this insulated steel travel mug one day when we were standing in line at the Pinnacle Plaza Starbucks in Beijing back in about 2001. The motives were purely mercenary, as Starbucks in China was offering to take ¥1 RMB off of the price of a coffee each time you brought your own cup.

Given how often I was going to Starbucks in Beijing, I’d take this with me each day. I started traveling with it so that I could get similar deals elsewhere in China, and then found they were even offering such incentives in other countries as well.

This mug, my first, went everywhere with me. It has been dropped, kicked, and bounced by me, by the occasional bumbling barista, and by the reliably gentle baggage handlers it encountered, and it shows the dings and dents you would expect. But it still holds coffee, still stands mostly straight on the table, and still travels with me.

There are few problems finding a great burrito, an excellent burger, or a decent pizza in LA: just ask a local and they’ll point you in the right direction. Good savory pies, though, are another matter.

I bought this mug to remind myself that the nearest veggie pie is just a few blocks from Vroman’s bookstore – or the DTLA Arts district.

The reverse says “Happiness: one cup at a time.”